A downloadable game for Windows

Updated to V1.0.2: Fixed a peasant death bug that crashes the game, retooled the map to be a little more forgiving - no more snatching peasants right off the map edges.

A Paladin's Work is Never Done was made for the 48-hour Game Creation Organization Online Jam, with the theme of "paladins."

You are a paladin, and your work is never done. Protect the village's peasants, as they go work at the fields, from kidnapping brigands and murderous wolves! If you lose six peasants, it's game over.

there you go buddy :D! Really enjoyed your game ! hope you enjoy my video ^^!

Haha, that was quite a show! Thanks for having a look at the game!

Aahaha no prob buddy :P! It was a lot of fun! Keep it up!

Damn those stupid peasants, the slow paladin, the greedy thieves and the hungry wolves!

Hi iwanPlays, thanks for checking the game out and doing a LP. Looks like you also discovered a bug; when you kill the brigand he's trying to release the captured peasant, but he no longer exists because the wolf killed him. I'm not sure if I should publish new versions during a jam's voting period though, even if its just a patch. Also, an interesting observation about the roads. They probably should be adjusted anyway, as I've started thinking them running so close to screen edges is somewhat unfair. 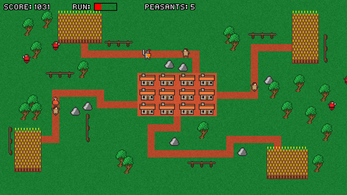 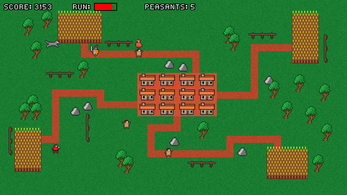 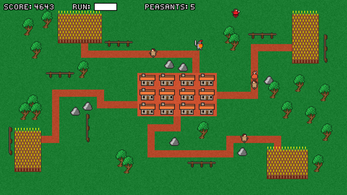